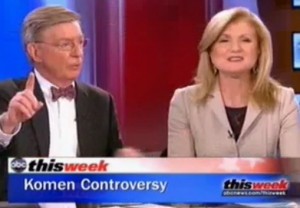 The lie that emergency contraception is the same as the “abortion pill” RU-486 has just completed the jump from the minds of Republicans like Michele Bachmann, to Fox News opinion programming, to the broader mainstream media. On Sunday morning’s This Week, host George Stephanopoulos sat mute as columnist George Will repeated the lie that the Obama administration’s Preventive Services Mandate would force religious employers to “provide…abortion-inducing drugs.”

Women’s health has been a hot topic in the news this week, with heated interest in the Obama administration’s announcement that certain religious employers would have one year to comply with the Affordable Care Act’s Preventive Services Mandate, and the intense backlash toward, and reversal of, the Susan G. Komen for the Cure charity’s decision to de-fund Planned Parenthood. There are strong opinions on every side of these issues, but on issues of medical fact, there is only one set of facts, and it is the news media’s duty to ensure that.

Conservative opponents of contraception have been trying to inject their articles of faith into the medical nomenclature around emergency contraception for a long time. Republican presidential candidate Newt Gingrich mentioned the medically paradoxical “Morning After Abortion Pill” in an opposition memo a few months ago, and Rep. Michele Bachmann had also been dropping references to the mythical meds into her stump speeches.

Hardball host Chris Matthews made the qualified statement that Catholics believe that certain types of contraception are “abortive,” but failed to provide the correct medical information, in a recent segment on the mandate.

On Sunday morning’s This Week, columnist George Will tried to change the subject from the Komen decision, telling host George Stephanopoulos “A much more important decision politically that was taken this week was the Obama administration saying that Catholic institutions have no choice, and this was applauded by pro-choice people, have no choice but to provide contraception, abortion-inducing drugs and sterilization.”

Stephanopoulos blankly replied, “I want to get to that, as well,” meaning the subject of the contraceptive mandate, but he never corrected Will’s assertion.

As I’ve written in this space several times now, the “morning after pill” is not an “abortion pill,” it can never be an “abortion pill,” because pregnancy cannot occur within the drug’s effectiveness window. Furthermore, the actual “abortion pill,” RU-486, is not covered by the Preventive Services Mandate (nor is it approved for over-the-counter sale, like Plan B is). The information that Will, et al, are disseminating is medically inaccurate, and people like Stephanopoulos have a duty to correct it, the way news organizations eventually corrected Michele Bachmann’s ludicrous claims about the HPV vaccine.

Broadcasting false medical information is a potentially dangerous act that is, at the very least, grossly irresponsible. In this case, it has the potential of discouraging women from using a medication that they have no reason to fear, or to encourage misuse of that same medication.

If Geogre Will said that large doses of aspirin cause four-hour erections, or that Lipitor makes you go blind, Stephanopoulos would surely have corrected him, but when it comes to women’s health, the media doesn’t seem to be taking science seriously. It falls to news consumers like you (and me) to demand that they do.