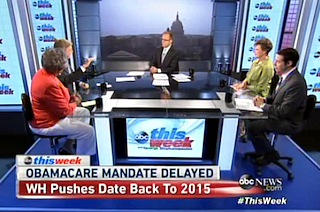 Jonathan Karl led a panel discussion on ABC’s This Week Sunday morning over the delay of the employer mandate provision of Obamacare, in which Donna Brazile battled George Will over the long-term viability of the law, and Cokie Roberts and Rich Klein speculated on the political and policy impacts of the delay.

Will was heavily critical not only of the delay of the provision, but of the mandate itself, arguing that it was indicative of the self-defeating complexity of the law.

“Obamacare requires, for it to work, mass irrationality both on the part of employers to ignore that incentive, and on the part of young people who are supposed to pay three, four, five times more for health insurance than it would cost them to just pay the fine and ignore it,” Will said.

“96% of businesses with fifty or more employers already provide health insurance,” Brazile pointed out. “This is not going to delay implementation. The law will still go into effect on October 1, 2013, with respect to the health exchanges.”

“This works for the president in the long run politically,” Roberts said, “even if he’s just going to take a lot of flack for it now. It delays implementation until after 2014, of the parts people are most upset about. And there is an intervening election, as they say, so that is helpful to him.”

Roberts also linked the flak over the law to the immigration debate: “Republicans are telling me that they think they can now rev up the conversation on Obamacare again, which they love because they think that’s a strong suit for them, and hope that immigration goes off the front pages as a result.”

Klein believed that the public problems with the bill would ultimately be bad press for the Obama administration.

“You had even Democrats saying that implementing Obamacare has the potential to be train wreck,” Klein said. “Well, now you have the prospect of a slow-motion train wreck. Here’s the thing about this particular provision. This effects thousands of workers, maybe, not the millions of workers who are going to be impacted over the long haul on this. So if you couldn’t even even get this piece of it right, after a three year ramp-up period, just to put in this tiny slice of Obamacare?”

Will was adamant that the early failure of this part of the bill was just the beginning. “Young people are not going to sign up, if they can do elementary arithmetic, which they can,” Will said.

“Not the way my children behave,” Will said.