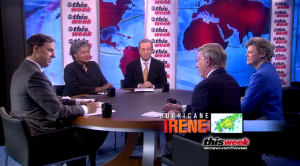 When we first learned that Hurricane Irene was headed for the United States, it was only a matter of time before comparisons and contrasts would be drawn between the response of federal and local governments during this storm to Hurricane Katrina, which Jake Tapper today described as “the hurricane that exposed mismanagement and weakness at the highest levels.”

Today’s This Week panel started by discussing the media reaction to the storm. George Will thought the coverage was creating “synthetic hysteria” and newspeople should not speak in dire terms when reporting on the hurricane. Cokie Roberts suggested the opposite, that the media should not understate the potential threat of a hurricane, pointing to the vast devastation of Hurricane Katrina and claiming that 5000 families were separated during the storm.

This brought the panel to the main focus of the discussion: the politics of a disaster response. Ron Brownstein, from the National Journal, highlighted a drop in George Bush‘s poll numbers following Katrina, arguing that the threat of a political fallout should be enough “for elected officials to really be on high alert” during a natural disaster. Donna Brazile described the government’s response to Irene as “adequate” and singled out FEMA director Chris Fugate for his work at the agency through several hurricanes over the past few years.

Roberts saw Katrina as a tipping point in the Bush administration because people no longer viewed him as the president who would keep them safe. As for President Obama‘s handling of Irene, Roberts thought that the president could improve his poll numbers if he demonstrated effective leadership during the storm. Brownstein agreed, positing that while strong leadership is not necessarily the only mark of an authoritative president, a lack of such would deal a significant blow to his popularity.

George Will, however, thought one of Obama’s biggest problems was the idea of portraying himself as a sort of larger-than-life problem solver, creating a “cult of the presidency” where the executive branch wields more power than it actually does. He also thought Obama should not be blaming other people and organizations for problems of governance that ultimately boil down to the separation of powers.