This Week Panel: Newt Gingrich On Immigration Is The Latest GOP ‘Scandal Of Sanity’
video

This Week Panel: Newt Gingrich On Immigration Is The Latest GOP ‘Scandal Of Sanity’ 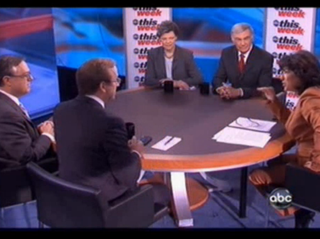 With Newt Gingrich nabbing a major endorsement in New Hampshire this morning, the panel on This Week assessed his strengths and chances of making it through to the nomination with a record like his. While agreeing that he was, among other things, “undisciplined,” they noted his comments on immigration could be a positive in the general, with Michael Gerson labeling yet another “scandal of sanity” in the GOP.

Panelist Jon Karl noted that the paper endorsing Gingrich, the Union Leader, was very strong support, as it goes out of its way to campaign regularly over the election season. With that in mind, host Christiane Amanpour wondered whether Gingrich was the “last non-Romney candidate.” That, added Cokie Roberts, depended on whether Gingrich would master his natural lack of discipline. “He’s one of the greatest strategists… so interesting, but he’s undisciplined!” Sam Donaldson agreed, adding that “he has five ideas a day: one or two of them are brilliant, one or two of them are okay, and one of them is terrible and he doesn’t know the difference.”

Gerson noted something strange about the fact that the answer on “immigration indicates Gingrich’s lack of discipline,” forming yet another “scandal of sanity, in which a Republican says something obviously true and they have to retract because of the conservative base.” The “gaffe,” he argued, proved “Gingrich unplugged can actually be quite admirable as well as undisciplined.”

The panel ended with a round of guesses as to who would win the Iowa caucus, with a surprising half of the panel suggesting Rick Santorum has a chance there. The segment via ABC below: