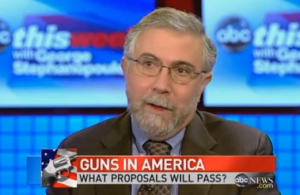 On ABC’s This Week, the panel tackled the issue of gun control — touching on everything from gun control to President Obama‘s skeet shooting. Hitting gun rights advocates, The New York Times‘ Paul Krugman pointed to the “craziness” of the debate.

“I think they had to put out that photo,” Matthew Dowd argued. But it wasn’t “very smart” for Obama to make the statement about skeet shooting in the New Republic interview because it wasn’t going to change any minds. And the picture “just makes him look like he’s pandering.”

Krugman looked at the issue more broadly, zoning in on the NRA and gun rights advocates.

“What strikes me is we’ve actually gotten a glimpse into the mindset, though, of the pro-gun people and we’ve seen certainly Wayne LaPierre and some of these others. It’s bizarre,” he said. They have this vision that we’re living in a Mad Max movie and that nothing can be done about it. That America cannot manage unless everybody’s prepared to shoot intruders, that the idea that we have police forces that provide public safety is somehow totally impractical, despite the fact that, you know, that is, in fact, the way we live.”

Yes, plenty of gun owners fine, Krugman said, responding to the criticism that he’s lumping everyone together. But guns are the problem.

“The lobbying groups, the NRA is now revealed as an insane organization, and that matters quite a lot,” he said.