This Week: The World Sees Palin Presidential Run With “Deep Horror” and “Some Amusement” 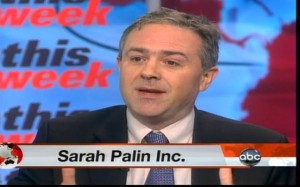 Sarah Palin sure knows how to get the pundits all fired up.  With the mere mention of her contemplating a run for President, pundits from across the political spectrum are racing to comment, and are often taking unpredictable stances.

On ABC’s This Week, resident conservative George Will, dismissed the possibility of Palin being a serious contender because “the independent voters have made up their minds about her, and it is a negative judgment they’ve made.”  Furthermore, Will takes issue with Palin showing up in “distinctly non-presidential venues” like Dancing with the Stars.  This Week host Christiane Amanpour challenged that Palin is just supporting her daughter Bristol, a finalist on the dancing show, but Will responded “it’s stirring family values, but it’s not good training to be President.”

Never fear though, Democrats Donna Brazile and Robert Reich were eager to jump to defend the legitimacy of Palin as a candidate.  Reich claims “she’s the only candidate to come along that actually embodies [anti-establishment] anger” and Brazile wants her to run to upset the Republican establishment and to show that a woman could be successful in a still male-dominated arena.  Then, Financial Times reporter Ed Luce, asked to be an ambassador from the world, says the world would view a Palin candidacy “with deep horror I think, but also some amusement.”

Amanpour attempts “to play devil’s advocate” by wondering aloud why people think it might be strange for “tea party godmother” Palin to run, given the success of tea party candidates in the past election.  While it’s fun to watch conservative pundits desperate to throw cold water on Palin’s potential and to watch liberal pundits now, all of a sudden, eager to prop her up as a serious contender, both ideas operate off of the same faulty premise: there is no way for Palin to actually win against Obama in 2012.

Actually, without the qualification of “devil’s advocate,” Amanpour asks the right question, why shouldn’t Palin be treated as a serious contender?  Given that candidates often campaign promising to change Washington, but after being elected often let Washington change them, Palin’s outsider-status and readiness to buck conventional wisdom suggests she actually would be the rare politician not to change, which could be just the ticket to connect with American voters.  And who cares if she chose to star in her own reality show rather than study policy as Will would have liked her to do.  Right now we have arguably one of the most intelligent presidents ever with Obama and most agree the situation is not going so great, so maybe it’s time to mix things up a bit and try giving the world “some amusement” with Palin?

Watch the clip courtesy of ABC News below: