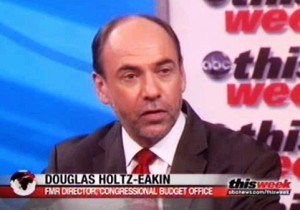 In introducing her “powerhouse roundtable of economic experts” Sunday morning, This Week host Christiane Amanpour ticked off a few of each guest’s credentials, but omitted a notable portion of Douglas Holtz-Eakin‘s résumé. While the other guests’ intros really let viewers know who was who, Holtz-Eakin’s intro included “former director of the Congressional Budget Office,” and “president of the American Action Forum.”

For viewers unfamiliar with AAF, it might have been helpful to mention that Holtz-Eakin was chief economic adviser to Sen. John McCain‘s presidential campaign.

Amanpour introduced the other guests in a way that would help to inform viewers about their points of view, if any, calling Paul Krugman a “columnist for the New York Times,” Carol Lee a reporter “who covers the White House for the Wall Street Journal,” and identifying Jared Bernstein as a former adviser to Vice President Joe Biden.

But Douglas Holtz-Eakin was introduced as “former director of the Congressional Budget Office, and he’s now president of the American Action Forum,” making no mention of Holtz-Eakin’s connection to the McCain campaign. Viewers who were unaware that AAF is a conservative 501(c)(3) organization (likely most of them) would probably infer that a former head of the non-partisan CBO is just a regular economist with no ax to grind. And who doesn’t like getting a little American Action now and then?

Ironically, conservative watchdog Newsbusters finds “liberal bias” in an exchange between Amanpour and Holtz-Eakin that would have made a lot more sense had Amanpour disclosed Holtz-Eakin’s background. He makes the ridiculous charge that the Compromiser-in-Chief is “ideologically inflexible,” and Amanpour weakly challenges him:

AMANPOUR: Well, Doug, can he be bold for the very reasons that poll just suggested, it’s — it’s not possible?

HOLTZ-EAKIN: Well, the question is, can he show some ideological flexibility, which he has not shown so far? He showed a little leg this week by rolling back a very expensive rule with the EPA. That was important.

AMANPOUR: Do you think that’s true, that he hasn’t shown flexibility, since he’s — he’s sort of come completely to the Republican end of the debate?

HOLTZ-EAKIN: But what we’ve seen is again and again the same playbook, which is we want to focus on near-term stimulus. And if you look at measures, like the budget deficit, if the economy is at full employment, that’s still rising in 2011. That playbook’s been in place. It’s not working. It didn’t work in the ’60s and ’70s, when we used, again and again, to use stimulus to fine-tune the economy.

So he needs to go to a different playbook, which says we have to have a fundamental change toward a growth philosophy. We need to have some permanent changes, like a lower corporate rate, tax repatriations for our business community. And he actually does have to show some respect for the business community. He needs small, medium and large businesses not to be the target of sort of class warfare rhetoric, but to be the focus of his policies.

Coming from a straight down-the-middle CBO economist, that’s pretty damning stuff, and that’s what Amanpour’s audience was led to believe they were getting, not a Republican shill-for-hire.

Amusingly, Newsbusters doubles down on the deception, diverging from This Week‘s transcript to include that shiny CBO credential after his name, and also never identifying him as a former McCain adviser and president of a conservative PAC. As an unabashedly conservative website, I expect nothing less, but from a legitimate news organization like ABC News, we should all expect more.

This story has been updated to reflect the fact that Newsbusters did not alter This Week‘s transcript in their story. Although the story doesn’t source the transcript, author Noel Sheppard, via email, says he used his own transcription.