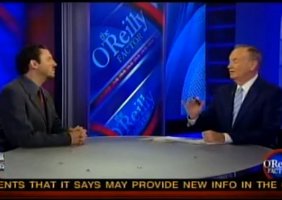 If you want a surefire way to get under Bill O’Reilly’s skin, make a public display of denouncing religion. David Silverman is president of American Atheists, a group behind two such public displays O’Reilly denounced on tonight’s Factor – then welcomed Silverman onto the program for a debate. You can take a stab at how it went.

“How it went” was two guys with completely incompatible, but rigid, worldviews – neither of which was about to change a bit, despite the other’s conviction. O’Reilly contended the signs from Silverman’s group – one of which pronounced all religions “scams.” Silverman viewed it as merely speaking the truth. O’Reilly thought the word “scam” implied he was a moron for believing in it. Silverman didn’t. Silverman even contended that deep down, O’Reilly must know his beliefs aren’t the real deal:

“You sit here and you’re skeptical every day, and then you go to church and you get on your knees and you pray to an invisible man in the sky – and you don’t think that’s a scam?”

“If you think that people go into church and they know that this is a scam and they write money to it – if you believe that, you’re a loon.”

O’Reilly defended himself by noting he only said Silverman would be a loon if he believed that…but Silverman had just finished saying that’s what he believes. Overall, though, despite the rampant disagreement and some snark from both parties, there wasn’t much rancor, and the two produced a fun (if not especially enlightening, beyond showing just how strong beliefs on either side of an issue can be) segment. Video, via Fox News, below.