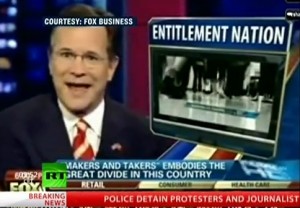 Liberal radio and TV host Thom Hartmann isn’t taking Fox Business Network’s weeklong series of “Makers vs. Takers” segments lying down, branding the theme an extension of the Republican “war on the middle class.” On his TV show, The Big Picture, Hartmann calls out the meme, “a war that pits the rich – or the makers – against the poor – the takers,” but his most revelatory insight is his debunking of the myth that wealthy individuals and corporations “create jobs.”

The way Hartmann breaks it down, it is truly amazing that this line of thought gets any traction at all, and indeed, the Tea Party energy that fueled the extension of the Bush tax cuts is giving way to the realization that such largesse comes at the expense of the so-called “takers,” or “people,” as they’re usually known.

But where Hartmann’s commentary really shines when he debunks the notion that wealthy corporations and individuals “create jobs.” This myth has been a linchpin in the Republican argument against allowing the Bush tax cuts to expire, arguing that “taxing the job creators” will hamper the economic recovery. It has also been repeated, unchallenged, by countless mainstream media reporters and hosts. The fact is, you could cut taxes on corporations to zero (which is what many of them pay anyway), and not create a single new job.

Businesses don’t hire people based on the amount of cash they have on hand, they hire on the basis of need. No matter what the tax rate, if a business can make more money by hiring someone to make/do something they can sell, they will do it. Conversely, if they can make the same amount of money, or more, without hiring someone, they won’t, and cutting all the taxes in the world won’t change that.

Honestly, it makes no earthly sense to assert that the expiration of the Bush tax cuts will “kill jobs.” Imagine a vending machine that dispenses $100 bills. Can you imagine anyone in the world stepping out of line because the price on that vending machine went from $35 to $39? If a business can make more money by hiring someone, they will, 100% of the time.

As Hartmann points out, it is demand that “creates jobs.” I scare-quote “creates jobs” because the phrase itself is misleading, giving the impression that businesses have a godlike ability to materialize employment, if only we would perform the right incantations and animal sacrifices. The fact is, our economy, like our government, consists of three (theoretically) co-equal branches: businesses, workers, and consumers. In order for the economy to do well, all three branches must be kept healthy. The problem is, the practices of one branch (businesses) have critically weakened the other two.

This is all the more amazing because those two weakened branches consist of the same people, yet all of the power still rests in the hands of business. There are no jobs because there is no demand, because consumers can’t afford to buy business’s products and services, because there are no jobs. In the short term, businesses can realize record profits by cutting costs (killing jobs), exploiting foreign labor (killing jobs), and gouging consumers for whatever they can (killing demand), but eventually, these “makers” will have no consumers left to sell to, and thus, no need to hire any of them.

Setting aside the logical disconnect at work here, the “Entitlement Nation: Makers vs. Takers” construct is downright insulting. So-called “entitlements” are actually contracts that we have made with each other, expressed through our representative government. They are a way to ensure the health of two out of the three branches of our economy, which in turn, ensures the health of the third. We’re not leeches, we are the reasons these businesses exist. The FBN attitude mirrors that of slacker Clerks character Randal, who says “This job would be great if it weren’t for the f***ing customers.”

Unfortunately, a lot of those customers don’t realize how much power they could have. Maybe they’re starting to catch on.

Here’s the clip form Hartmann’s show, which should be shown to every news personality before they interview another business flack: