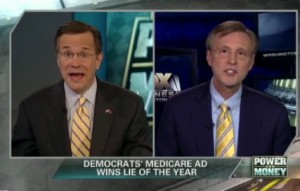 The blowback from Politifact’s ‘Lie Of The Year’ award has been fast, furious, and despite Politifact‘s smug insistence to the contrary, bipartisan. One overlooked effect of the site’s naming “Republicans Voted To End Medicare” their “Lie Of The Year” is that it gives the false impression that Paul Ryan‘s original plan to end Medicare as we know it was nothing to worry about, and paves the way for acceptance of the newer Ryan-Wyden Medicare “reform” plan. In an interview with Fox Business’s David Asman, liberal radio and TV host Thom Hartmann slammed Sen. Ron Wyden (D-OR) and Politifact for their assault on Medicare.

In case you missed it, Politifact has been taking flak from every quarter (except their fellow fact-checkers) for naming claims by some Democrats that “Republicans voted to end Medicare” as its “Lie of the Year,” despite the fact that the claim is arguably true, and despite the fact that most Democrats qualified the claim in a way that even Politifact agrees was accurate. Thom Hartmann was way ahead of that curve, decimating Politifact’s argument weeks ago, when it was still just a nominee, and he made the same argument to FBN’s David Asman this week.

He also tackled the silly objection that the Democrats’ ads featured senior citizens, even though the Ryan plan wouldn’t have affected people 55 and older. Those affected would, of course, be elderly when they were affected, so unless Politifact wanted to offer an alternative way to depict them, that was a hollow criticism.

As expected, though, the Politifact decision is already being used to plow the road for the new Ryan-Wyden “reform” plan, which is superficially better than Ryan’s original plan because it pegs the voucher amount to the actual cost of health insurance premiums. In reality, it’s just a back-door attack on Medicare that actually illustrates that the true intent of the Ryan plan is to end Medicare.

The modified plan won’t really save any money, but it accomplishes the heaviest lift in the war on Medicare: decoupling senior citizens from their benefits. Once that’s done, cutting the voucher amount is a lot simpler. The Ryan/Wyden plan also weakens Medicare by allowing private insurance companies to cherry-pick the lowest risk patients, increasing the costs for those who remain in the program. The only real “feature” of this plan is that it allows seniors to choose private health insurance, something they already can do, only now, it’s in the form of low-cost Medicare supplement policies.

“He says individuals should have a choice,” Asman replied.

“He is a useful idiot,” later explaining, “There’s a reason why the health insurance companies supported medicare. Yhey did not want to pay the expense of the older people. Now paul ryan says we will issue vouchers for $8,000 per year. Good luck. They will take the healthier older people, then you end up with sicker older people in the government program to turn into a health care ghetto.”

Always beware of Republicans offering a “choice,” because that choice is usually to weaken something that helps average people. Try to imagine this program being applied to some other life-and-death issue, like police protection. Say you gave Americans the “choice” between normal, public police, and hiring their own private security. Most people would not be able to afford adequate protection, and would “choose” to stay where they are, but those few who could afford it would siphon off most of the funding for everyone else’s cops to pay for their vouchers, leaving the people who need the police the most with the worst protection.

The Ryan-Wyden Medicare “reform” plan is nothing but a Trojan Horse attack on an institution that works, and another attempt to end Medicare as we know it. Fact-check that, Politifact.

Here’s the clip, from FBN’s Power and Money: