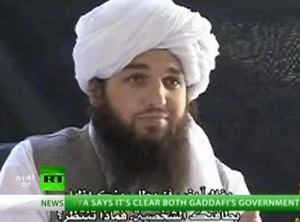 While we were all enthralled by the epic Weinergate saga, a different tale of unsecured weaponry went virtually unnoticed. On Thursday’s The Big Picture, liberal radio and TV host Thom Hartmann discussed a recent call by Al Qaeda spokesman Adam Gadahn for aspiring terrorists to exploit weak US gun control laws. Hartmann debated the topic with The Weekly Standard‘s Daniel Halper and Jamie Weinstein of The Daily Caller, who didn’t object to closing the loophole, but weren’t that fired up about it, either.

Hartmann leads off with a clip from Gadahn, in which the American-born Al Qaeda spokesman says “America is absolutely awash with easily obtainable firearms.  You can go down to a gun show at the local convention center and come away with a fully automatic assault rifle, without a background check, and most likely without having to show an identification card. So what are you waiting for?”

Hartmann debates the topic with a panel of two conservatives, a notable departure from liberal TV personalities like Keith Olbermann, and the result is fairly predictable: Weinstein says that changing the law won’t “solve the problem” because terrorists can still get guns illegally, and that if everybody had a gun, things would’ve turned out much better in mass shootings like the Mumbai attack. Halper agrees with stricter background checks, but says the solution won’t really be found in reforming gun laws, but by defeating the terrorists themselves:

Of course, both conservative arguments in this case fail miserably. Seatbelts don’t “solve the problem” of traffic fatalities, but they sure as hell cut down on them. Forcing terrorists to obtain guns illegally adds another layer or two for them to be caught before they can attack. The notion that an armed-to-the-teeth citizenry could prevent a mass shooting is belied by stories like the Tucson Massacre, in which armed bystander Joe Zamudio said he nearly shot the wrong man. In a situation like that, how is the average Joe supposed to know whom to shoot, and how trustworth y is the average Joe’s aim?

Both of these rationales ignore key facts, such as the fact that the most recent attempted attacks here were performed by just the kind of idiots who would need a gun show loophole to succeed. As I pointed out a year and a half ago, if “Undiebomber” Abdul Farouk Abdulmutallab had left his poor gonads alone and completed that flight uneventfully, he could have picked up a pile of handguns at a gun show once he got here, and killed who knows how many people before blowing his own balls off.

Then, there’s the attempted Times Square bomber, who left his keys inside his makeshift car bomb. Since both he and Abdulmutallab seem to have received their teerror training from Wile E. Coyote, it’s a safe bet that guys like this might trip up while buying arms on the black market, but would have considerably more success at a gun show.

Finally, there’s the fact that the most successful attack on US soil since 9/11 was, wait for it, a mass shooting.

As Hartmann points out, Republicans have used the War on Terror to push through all manner of dodgy propositions, up to and including the Iraq War, but have no inclination to take on the NRA.

Unfortunately, neither do the Democrats, including President Obama. Despite the Tucson Tragedy in January, there has been precious little action on gun legislation, and despite a weak sauce op-ed in March that didn’t address the gun show loophole or extended magazines, the President’s efforts have been so far “under the radar,” they’ve been showing up on sonar.

Even less comforting is the White House’s reaction to Gadahn’s statement. HuffPo’s Sam Stein asked Press Secretary Jay Carney about it Monday: (transcript via email from The White House)

Sam Stein: Last week an al Qaeda spokesperson released a video statement saying something to the extent of a good way to get access to firearms is through gun show loopholes in America.  And I’m wondering how serious the White House is taking this statement, and also if they’ve directed the Justice Department to look into the matter.  And how do gun control policies stand — I’m sorry, gun control policy talks stand with the administration?  I know there was a task force that convened at the Justice Department a little while ago, but we haven’t heard an update since then.

MR. CARNEY: I honestly am not aware of the statement that you mentioned, Sam.  And I would encourage you to go to the Justice Department on it.  We’re very mindful of any threats emanating from al Qaeda and take them seriously, so I’m sure that the appropriate folks are aware of it and acting on it.  But I’ll have to send you to Justice for that.

Stein did contact Justice, and here’s what they told him:

Matt Miller, a spokesman for the Justice Department, told The Huffington Post that the administration “supports closing the gun show loophole so that criminals and other people who are prohibited by law from purchasing guns can’t acquire them.”

This is the same President who “supported” the public option. When do we get one of those?

Furthermore, the gun show loophole is not an issue that you can tug and pull at for two years, like DADT. With a warning this clear, if something goes down, no one will care about overwhelming, unanimous Republican opposition to gun control, but rather, the President’s inaction. This is the kind of issue that he and the Democrats needs to make a lot of noise on, and go down fighting hard, if need be. The Democrats, and Obama in particular, have been slow to learn that even if you don’t have the votes, taking the vote matters.