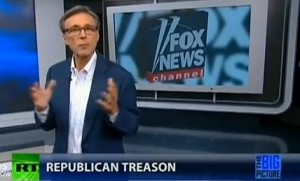 As the general election heats up, Republican obstructionism has become an increasingly hot topic, traced to an Inauguration Day meeting of GOP lawmakers, along with pollster Frank Luntz and former Speaker Newt Gingrich, detailed in Robert Draper‘s Do Not Ask What Good We Do. Liberal radio and TV host Thom Hartmann makes the case that the Republicans (and Fox News, by virtue of Luntz’s involvement) are guilty of “treason, or sedition, or whatever it was,” and makes a nice smoking-gun catch from Friday’s Real Time with Bill Maher.

In his book Do Not Ask What Good We Do, author Robert Draper details a meeting which took place the night of President Obama’s inauguration, in which Republican Congressional leaders made a pact to “show united and unyielding opposition to the president’s economic policies” in order to regain power, and eventually take the White House in 2012. The facts surrounding this meeting are not in doubt; former House Speaker Newt Gingrich says he was “glad and honored to be part of it.”

There are those who would defend this meeting, as Gingrich did, by saying that any political party would work to regain power, but this wasn’t a case where they got together and said “Let’s make sure we get as many of our policies enacted as we can,” or “Let’s make sure we block these things that we really disagree with, that we think would be bad for the country,” they conspired to block everything. If you need a smoking gun, check their record, since that meeting, of voting against things that were their own ideas just because President Obama decided to support them.

Whether this amounts to “treason” or “sedition,” as Thom Hartmann suggests, is a matter of semantics that are, I’m sure, intended to be provocative (remember how Rick Perry‘s invocation of the crime set off the outrage grenades). As for Fox News’ culpability, it’s my understanding that Frank Luntz is not a paid employee of, or contributor to, Fox News. Their connection, it seems, is spiritual only.

The Republicans’ conduct does reach beyond mere bad faith, especially when put into the context that Hartmann does by describing the calamitous challenges that the President faced on Inauguration Day, before he had managed to pull the economy away from the Bush-era cliff. Given the perilous stakes, it is stunning that any American could plot, on that day, to do anything but rescue us from the worldwide depression that threatened us. Can you imagine if, on September 12, 2001, a group of Democrats got together to plot blocking all of George W. Bush‘s policies, no matter what they were?

Hartmann also demonstrates that this is not some long-ago pipe dream by Republicans, but rather, a blood pact that is still in effect today, by pointing out a jaw-dropping revelation from Business Insider‘s Michael Brendan Dougherty. On Friday’s Real Time with Bill Maher, Dougherty revealed that a Republican Senator, not a staffer, not a strategist, but an actual US Senator, told him that Senate Minority Leader Mitch McConnell had issued sickening marching orders to his caucus. Here’s what Dougherty said:

I spoke to a Senator earlier this week, and he told me that, a Republican Senator told me that Mitch McConnell has told his conference that ‘We’re not doing anything, we won’t make a single move between now and the election, because any move could be risky, and all of the shit is sliding down on President Obama.’

So, they’re not going to do anything, they’ve talked about this very clearly among themselves.

The Republicans aren’t going to make a single move between now and the election, because anything they do carries with it the “risk” that the economy improves.

Well, the penalty for treason is death, and I definitely don’t think Republicans in Congress should be put to death. Their electoral prospects, howevr, should be taken out and shot. Unfortunately, there’s every chance that their betrayal will be rewarded, if not with the White House, then perhaps with electoral gains in Congress, thanks in large part to a mainstream media that continues to insist that “both sides” are the problem.

Here’s the clip, from The Big Picture with Thom Hartmann: