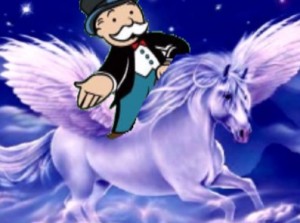 On Thursday night’s The Big Picture with Thom Hartmann, the liberal host continued his lonely effort to challenge the myth that wealthy individuals and corporations are “job creators,” arguing that the real job creators are working Americans who spend money and create demand. Hartmann and AlterNet’s Joshua Holland discussed the results of a recent ABC/WaPo poll which shows that large majorities of Americans are in on the secret that a free ride for the wealthy hasn’t helped, and won’t help, “create jobs.”

Hartmann starts out by noting that Americans overwhelmingly (62%) favor a balanced approach to deficit reduction, one which includes raising taxes on people who make more than $250,000 a year (72% favor), raising the Social Security tax cap (66%), closing the hedge fund manager tax loophole (64%), and cutting off taxpayer subsidies for big oil corporations (59%). Yet, with all of that support, Hartmann notes, none of these approaches is contained in the bi-partisan “Gang of Six” plan. (Nor were they included in the deal that President Obama spoke about yesterday, which contained even less revenue than the “Gang of Six” plan, but still too much for Speaker Boehner.)

Hartmann also cites a recent Gallup poll which shows that deficits and debt are a distant third in American’s economic priorities. So how have Republicans, who ran on “jobs, jobs, jobs” in November, managing to hijack the conversation? A lot of it has to do with the way Democrats allow the debate to occur on biased conservative terms, and “job creation” is a prime example.

Hartmann and Holland go a lot of the way toward dispelling this myth, pointing at the $2 trillion that businesses are sitting on because there’s no one to buy their goods and services. Again, this seems like the most obvious thing in the world, but no business in the world is going to hire people if there’s no additional demand, and conversely, no business is going to turn down throngs of customers just because of a 3% marginal tax rate increase.

Hartmann and Holland are close to the mark when they say that consumers are the “real job creators,” but the truth is, “job creation” itself is a myth. Calling wealthy people “job creators” is like calling a puddle of water a “plant creator.” Jobs, like plants, are grown, and it takes more than a puddle of water. It takes seeds, soil, sunlight, and shade to grow a plant, and it takes a similar mix of factors to grow a job. Where Hartmann and Holland are close is that many more of those factors depend on the average working American than on the wealthy.

To grow a private sector job, you need a product or service (the seed), consumer demand (sunlight), capital (water), a capable workforce (soil), and legal protection for companies and consumers (shade). At a glance, this looks fairly balanced, until you realize that not only do we (working Americans) provide both the labor force and the demand, we also provide a good bit of the capital (through our purchases, through retirement investing, through the usurious fees and loopholes we pay), we elect and fund the government that provides businesses protection (and bails them out), and we even think up some of the products and services that businesses profit from.

That $2 trillion puddle of water won’t grow anything without us, and the Republican plan to cut spending that benefits working people, while protecting the wealthy, will only result in an ever more bitter harvest. Already, the Republican war on the public sector has killed 500,000 jobs, the direct consequence of which is even less consumers, less demand.

Republicans discount government jobs because they don’t “produce revenue,” an argument that’s as dumb as the “job creation” myth. Government workers save businesses when they catch on fire, arrest criminals who steal from them, teach their workforce how to read and write, provide health care for those workers who can’t afford it themselves, protect them from having their product ideas stolen, protect their interests overseas, build the roads and transit systems that carry workers (and customers) to them…you get the idea. How much of that $2 trillion would it take to do all of that?

It doesn’t take a genius to see who’s getting a good deal here, and who’s getting screwed. It takes an entirely different sort of mind to think that the solution is to make that disparity worse. Most of all, though, mainstream media types, even liberal ones, need to start calling this stuff out the way Hartmann is.

Here’s the clip, from RT America: