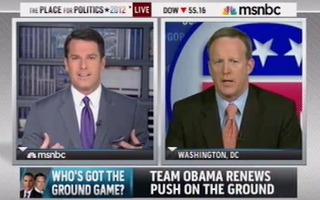 On Wednesday, MSNBC anchor Thomas Roberts and Republican National Committee Communications Director Sean Spicer engaged in a heated back and forth over the issue of voter identification requirements in places like Ohio. Roberts charged that Republican politicians advocating for voter identification laws were pushing “voter suppression” and imposing an unconstitutional “poll tax” on poor and minority voters. Spicer took offense at the charge and hit back against critics of voter I.D. forcefully.

After Roberts asked Spicer to detail the GOP’s early voting and registration strategy, he asked if the Republican party has “put too much stock in voter suppression.”

“A lot of efforts were done to try to suppress the vote in different states, and with all these Republican-led statehouses trying to change the laws,” said Roberts. “Was there too much emphasis on that?”

“I actually find it extremely insulting to say that there was any effort by anyone to suppress the vote,” said Spicer. “I find that unbelievably insulting.”

Roberts interrupted, asking if Spicer would say that to a federal panel who recently ruled that a voter identification law in Texas would impose an undue burden on the poor. “They said that this was basically a poll tax and it would be voter suppression in the state of Texas and it won’t be happening there,” said Roberts.

Spicer shot back that a similar law in Rhode Island has gone unchallenged, as well as in other states. He also said that a broad majority of Americans support identification requirements. Spicer went on to conclude that most identification is provided for free and the principle that applies to air planes and government buildings should also apply to the voting booth.

“But your basic American right is not to fly, is it Sean,” Roberts asked.

“No, but I don’t understand your question,” Spicer replied. Crosstalk ensued as the pair argued over the validity of the equation between the right to enter a secured area and the right to vote. Spicer argued that the right to drive on a road could be a poll tax because a license is required.

“A poll tax only refers to the right to vote,” Roberts said.

“I know what a poll tax is,” Spicer fired back. Spicer said that Roberts locks his doors at night not because there is a history of burglary, but because he is insuring against that possibility.

“But why do we need to lock down people from voting,” Roberts asked.

The conversation devolved into crosstalk again as the two argued over whether voter identification laws were constitutional and did or did not constitute a poll tax.