Those ‘F*ck Her Right in Her P*ssy’ TV News Gaffes Are a Hoax; Stop Sharing Them

Dear everyone currently sharing a viral video(s) supposedly featuring a hoodie-clad man shouting “fuck her right in the pussy” into a TV news microphone: Please stop. It’s a fake. They are all fakes.

The hilarious video in question was uploaded to LiveLeak this afternoon, claiming to contain footage from Cincinnati’s CBS-affiliated WKRC-TV. While “reporting” on a local Ohio oil spill, the unidentified female reporter turns to an older man in a black hoodie for more insight on as to how locals are suffering. His response: “I was sitting on my front porch, grabbed a beer, and fucked her right in the pussy!” Watch below:

Seems pretty legit, right? The “oil spill” chyron seems especially realistic; the cameraman did a professional-grade pan from the street to the reporter who is carrying an official Local 12 microphone; and the shocked reactions of the reporter and the in-studio anchors seems authentic. Except none of it is. It’s all just clever editing.

Using our eyes to spot a “Lacresta Dr.” street sign and a giant White Castle board above their heads, we’ve been able to identify that the video was shot on a street corner in Florence, Ky. — a good 30+ miles south of the Ohio township in question.

Another point to consider: That particular oil spill happened in late March. So if this video is to be believed as authentic, wouldn’t some intrepid Reddit user have already made it famous by now? Why would it have taken this long to emerge onto the internet?

Oh, also: The station itself confirmed to Mediaite that the woman on-air has nothing to do with WKRC and that this is all one giant hoax. So, there’s that.

YouTube iterations of this video boast that the “F- Her right in the Pussy guy is at it again,” i.e., this crazy funny totally awesome viral local news clip has been done before! And here it is:

Nope. The “fuck her right in the pussy” guy has never struck before, nor has he “struck again.”

It’s pretty easy to spot how this one is fake: The reporter barely reacts when her microphone is stolen; and, more importantly, the in-studio voice following the gaffe is that of Fox’s Megyn Kelly. “Oh my goodness, obviously someone has interfered with Laura Ingle‘s live shot,” she says, after video shows someone-who-is-100%-not-Laura-Ingle getting interrupted by this hoodie-clad annoyance.

Also: WLWT is an NBC station, so why the hell would Fox News ever use the talents of a rival news station for on-the-street reporting? This whole thing is moronic. And just the product of editing tricks.

And yet, both instances of this (admittedly well-executed) hoax have gone viral. The more recent one even got some promotion from NowThis News:

The sleazeball that created these videos (JohnCain.TV) boasts so much about the virality of the videos that he now offers t-shirts with the slogan: 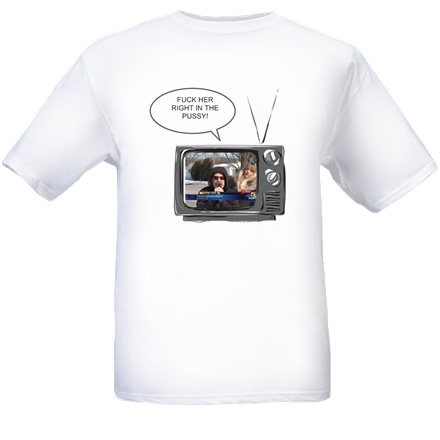 But hopefully our post will serve as a PSA for everyone out there in Internet Land: When it comes to “fuck her right in the pussy” guy, do not trust… but do verify.