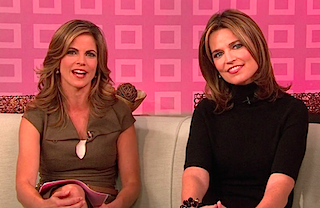 Former ESPN executive Jamie Horowitz was on the job as general manager at NBC’s Today show for less than three months before network president Deborah Turness abruptly fired him last week. The news of Horowitz’s departure was quickly followed by an “exclusive” report from Us Weekly magazine that anchors Natalie Morales and Willie Geist had been fired as well — a rumor Turness acted quickly to dismiss as false.

Now, in a new story from The Hollywood Reporter, writer Michael O’Connell has revealed the specific moves that led to Horowitz’s firing. The decision to let him go reportedly came after a presentation he gave that included some bold direction changes for Today, including the firing of lead co-host Savannah Guthrie.

Sources say the former ESPN exec (hired to a three-year, $3.3 million deal, according to The New York Times) made a bold five-hour presentation to NBC News president Deborah Turness in mid-November. He proposed that Today lead co-anchor Savannah Guthrie, 42, be dropped and Morales demoted. The morning show’s 10 a.m. co-anchor Hoda Kotb, 50, should be redeployed to the earlier hours; Josh Elliott, 43, groomed for a larger role; and Al Roker, 60, moved off the weather beat. Horowitz’s would-be plan was in opposition to Turness’ take on Today; as one source puts it, Turness thinks there’s a problem with the playbook while Horowitz sees the issue as the show’s players.

Horowitz’s plan, intended to help Today retake its once-consistent ratings lead over ABC’s Good Morning America, did not sit well with executive producer Don Nash or lead anchor Matt Lauer. Then, when anonymously-sourced rumors about Morales’ departure started popping up in the New York Post’s Page Six column, some at NBC suspected Horowitz might be responsible for placing them there.

In public, the anchors in question have appeared to take the rumors in stride, joking about the whole thing on air last Thursday. But with no one officially in charge at the top of Today and GMA still number one in the ratings, everyone has to be at least a little bit nervous about the future of the franchise.

Read the full report at hollywoodreporter.com.