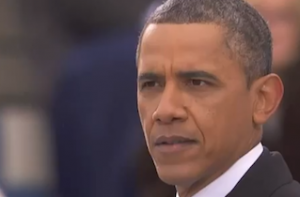 After a general election in which the words “climate change” did not come up in any of the presidential or vice presidential debates, President Obama made the issue a major part of his second inaugural address.

The gun debate has dominated the political conversation since December’s Sandy Hook elementary school shooting. But during the last stages of the election it was Hurricane Sandy and its aftermath that captured America’s attention. At least one influential voter, Mayor Mike Bloomberg, chose to endorse President Obama based on the implicit promise that he would combat climate change in an effort to prevent future natural disasters.

The text and video of President Obama’s remarks on climate change section from inauguration speech are below:

“We, the people, still believe that our obligations as Americans are not just to ourselves, but to all posterity. We will respond to the threat of climate change, knowing that the failure to do so would betray our children and future generations. Some may still deny the overwhelming judgment of science, but none can avoid the devastating impact of raging fires, and crippling drought, and more powerful storms.

The path towards sustainable energy sources will be long and sometimes difficult. But America cannot resist this transition; we must lead it. We cannot cede to other nations the technology that will power new jobs and new industries – we must claim its promise. That is how we will maintain our economic vitality and our national treasure – our forests and waterways; our croplands and snowcapped peaks. That is how we will preserve our planet, commanded to our care by God. That’s what will lend meaning to the creed our fathers once declared.”