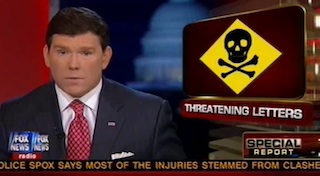 Here’s another charming reminder that, guess what, there are crazies out there. More often than you’d think, politicians and media figures receive threatening messages from the public. In just the past year, shows like The Late Late Show and Dancing with the Stars had anthrax scares. This past week, though, a fairly shocking amount of Congress members and TV shows received threatening letters seemingly from a location in Portland, Oregon.

Letters that were described as “anti Establishment/Wall Street in tone” and included a white powder that was later found to be harmless were mailed to many disparate locations. In addition to targets like The New York Times and The Daily Show, Reuters has the disturbingly long list:

“House of Representatives Speaker John Boehner, the top Republican in Congress, received a letter containing a powdery substance at one of his offices in his home state of Ohio, a Republican aide said, adding that the powder was harmless.

Other media that received the letters were The Colbert Report, Washington Post, USA Today, the Chicago Tribune, the Los Angeles Times, the Seattle Post-Intelligencer, MacNeil/Lehrer Productions, This Week with Christiane Amanpour, Countdown with Keith Olbermann and Fox News.”

The letters were signed by “The MIB” and, since they were postmarked in Portland, I’d say there’s an equal chance that this is horribly misguided viral marketing for either Portlandia or Men in Black 3.

All joking aside, back when I was in college, I interned at The Colbert Report and, any time I manned the phones for even 30 minutes, I’d get at least a couple calls from people who were, at the best, confused and, at the worst, unsettling enough to pass along to security. Events like this remind us of the dark side of being in the public eye. Unfortunately, it’s just a fact of life that there are dangerous and disturbed people out there.

Below, watch a clip from Fox News in which Bret Baier announces the letters that Fox News received: