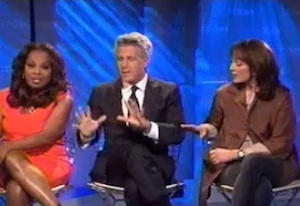 On a segment discussing the headlines of the day, three TODAY contributors took turns sharply whacking Republican hopeful Mitt Romney around like a piñata. It began when host Matt Lauer asked if the former Massachusetts Governor could relate to average people.

“It has nothing to do with his wealth,” Donny Deutsch explained. “JFK was wealthy. Mike Bloomberg — the incredibly popular mayor of New York — is worth $20 billion. He’s just an awkward human being. His wife said he’s funny, he likes comedy. He says, ‘Yes, I like Laurel & Hardy.’ He’s a robot! We never elect a guy that’s not likable.”

RELATED: Mika Brzezinski On Mitt Romney: ‘There’s Something Wrong With His People’

“Are these not slips of the tongue?” Lauer asked. “Is this who the guy is?”

“Yes! When people tell you who they are, actually believe them,” responded Star Jones. “He’s got wealth and success, which isn’t a problem, but when it’s mixed with arrogance without empathy that’s a problem!”

“He’s just not cool, and he’s trying to be cool,” Nancy Snyderman added. “He’s the guy who shows up in jeans and you go, ‘Really?! I’ve never seen you in jeans before.'”

“Of course you want a president to relate to average citizens. but do we want someone to go out of his or her way to pretend to relate?” Lauer pressed. “He’s being who he is.”

“No he’s not!” Snyderman interjected.

“It’s not the issue that he’s wealthy, it’s that he’s not likable and not real,” opined Deutsch. “We vote for humans, we don’t vote for issues. He will not win. I guarantee it.”

“He’s working so hard to be something he’s not. That’s his stumbling block,” Snyderman added.

Watch the three-on-one throwdown below via NBC: