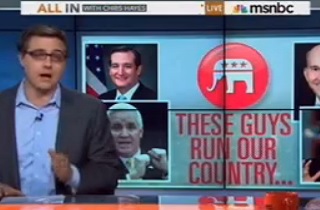 Earlier this week, Mediaite‘s Noah Rothman offered up a combination critique/title change suggestion when he asked “What’s Wrong With Chris Hayes,” but one thing that has been consistently compelling about All In with Chris Hayes has been the host’s commentary segments. On Friday night’s show, host Chris Hayes pulled out a new wrench from the toolkit, trading the restrained emotional edge that has marked his most compelling rants for gleeful invective. Running down a laundry list of recent GOP offenses, Hayes repeatedly, happily, and mock-apologetically branded Republicans as “jackasses.”

Hayes introduced the theme right away with what he described as a “segment dedicated to Republicans being jack asses,” because “a lot happened in politics” this week, “and it fits a certain theme. I’m sorry, but that theme is Republicans acting like jackasses.”

He then went on to recount the copious jackassery, including Rep. Trent Franks‘ (R-AZ) attempt to enact an unconstitutional abortion ban, Rep. Louie Gohmert‘s (R-TX) expertise on medically futile pregnancies, Governor Tom Corbett‘s (R-PA) recent attempt to reach out to minorities by forgetting he has one on his own staff (with bonus transvaginal jackassery from Corbett’s historical dossier), Sen. David Vitter‘s (R-LA) introduction of a cruel amendment to the farm bill that would make hungry children share their food allowances with their convicted murderer parents, and Sen. Ted Cruz‘s (R-TX) effort to fast-track the next debt ceiling hostage crisis:

On the farm bill, Hayes made the excellent point that the man who introduced a measure that seeks to deny food assistance to convicted violent criminals who have nonetheless paid their debt to society, is himself the recipient of copious second chances, with very little evidence of redemption. Hayes said he agreed with post-scandal Vitter that “people who commit infractions, even crimes, should be allowed to seek forgiveness, pay penance and move on with their lives,” and added that “David Vitter wants forgiveness from his wife, and to put his transgressions behind him, but does not want to offer other people the same chance. There is a word for that, but it seems to have slipped my mind.”

It’s also important to note two other things: Vitter’s amendment does more than just continuing to punish people who have paid their debts to society, it actually cuts their children twice; it forces the kids to share their food assistance with the affected parent, and reducing the kids’ eligibility for that assistance by whatever amount the parent manages to make at a job. It is a horrible policy with no redeeming features, since we will happily continue to pay to feed murderers who manage to keep themselves in jail.

The second thing is that, unfortunately, Democrats aren’t as good at leveraging bloody-shirt votes like this as Republicans are, so because they don’t want to have to answer campaign ads that say “Senator So-and-so voted to give rapists food stamps,” the Senate approved the amendment unanimously, and probably won’t take it out.

Other than that, though, Hayes was spot-on, and while “invective” might seem like a bit of an overstatement, Haye’s seven invocations of the term “jackass” are a departure from his affability-on-steroids M.O., while his amused delivery contrasts with the more emotional, yet more verbally restrained, commentaries he’s done before. My own preference for venting notwithstanding, Hayes might do well to combine this new rhetorical edge with the restrained bitterness he’s mustered so effectively in the past.