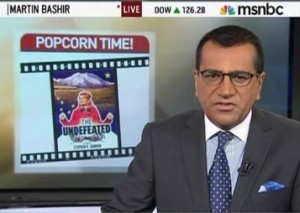 MSNBC’s Martin Bashir featured a segment on his show dedicated to reviewing Sarah Palin‘s new documentary “Undefeated,” which premieres in Iowa today. Bashir sarcastically referred to Palin as a “cinematic idol,” dismissed the movie itself as a “celluloid valentine” and laughed at the premiere event being “graced by the presence of the losing Vice Presidential candidate herself.” With Bashir just warming up, it’s hard to tell how this “news” segment was anything more than merely an opportunity for Bashir to take one cheap shot after another, with Christina Bellantoni from Roll Call merely laughing and going along for the ride.

Bashir was puzzled why “the entire scintallating movie” was called “Undefeated” when in fact “she and John McCain were trounced in the last election?” Bellantoni, who actually saw the movie, suggested filmmakers say the term “undefeated” refers to the spirit of the movement. Bashir also didn’t understand “what of wild lions devouring a zebra got to do with a half-term, former Governor from Alaska?” Independent of Bashir’s unnecessarily surly tone, that actually might be the only legitimate question asked by Bashir. Bellantoni replied that the movie is actually full of B-Roll footage of strange things that left even conservative audience members often snickering. Yet Bashir wasn’t done, as his final “question” barely even attempted to disguise his true disapproval of everything Palin:

“[This movie is] apparently an attempt to promote Sarah Palin’s values. But I have to ask, what are those values? Walk out of public office halfway through your allocated term. Have a child who becomes pregnant as an eighteen-year-old. And then use every possible opportunity to make money out of your celebrity. Those are her values aren’t they?”

If the words alone don’t convey Bashir’s opinion of Palin, his hostile tone in the clip certainly makes it clear. In fact if anyone seems to represent a wild lion hunting its prey, in this segment Bashir licking his lips as he tries to rip apart Palin sure comes close. Bashir is certainly entitled to complain about Palin stealing the spotlight away from other Republican candidates with this movie (as he did in an earlier segment), but to use her movie as an opportunity to spend a whole segment unloading personal attacks on Palin’s values and mocking her entire political career ultimately just seems amateurish and hardly newsworthy.

Bashir closed by calling the movie “Undefeated . . . and maybe partly untrue.” Similarly I think “unfair” would be a good word to describe this segment.