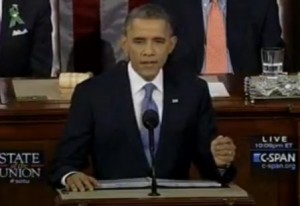 President Obama capped off Tuesday night’s State of the Union Address with an extended portion on gun violence in which he named several of the measures under consideration, including the assault weapons ban, and called on Congress to vote on all of them. “If you want to vote no, that’s your choice. But these proposals deserve a vote.,” he said, and after naming several individuals and towns that have been destroyed by gun violence, added “they deserve a simple vote.”

Although the President has consistently called on Congress to vote on all of his proposals, his remarks at tonight’s State of the Union represent his strongest such urging to date, and indicate that he has no intention of letting up on lawmakers who would rather just tackle the easy stuff.

“What I’ve said tonight matters little if we don’t come together to protect our most precious resource – our children,” President Obama began. “It has been two months since Newtown. I know this is not the first time this country has debated how to reduce gun violence. But this time is different. Overwhelming majorities of Americans – Americans who believe in the 2nd Amendment – have come together around common sense reform – like background checks that will make it harder for criminals to get their hands on a gun. Senators of both parties are working together on tough new laws to prevent anyone from buying guns for resale to criminals. Police chiefs are asking our help to get weapons of war and massive ammunition magazines off our streets, because they are tired of being outgunned.”

“Each of these proposals deserves a vote in Congress,” he continued. “If you want to vote no, that’s your choice. But these proposals deserve a vote. Because in the two months since Newtown, more than a thousand birthdays, graduations, and anniversaries have been stolen from our lives by a bullet from a gun.”

According to Slate’s map of published reports on gun deaths, that number is much closer to two thousand. Since the mass shooting at Sandy Hook Elementary School, there have been 1,775 reported gun deaths, including 31 children and 101 teenagers.

“One of those we lost was a young girl named Hadiya Pendleton,” the President added. “She was 15 years old. She loved Fig Newtons and lip gloss. She was a majorette. She was so good to her friends, they all thought they were her best friend. Just three weeks ago, she was here, in Washington, with her classmates, performing for her country at my inauguration. And a week later, she was shot and killed in a Chicago park after school, just a mile away from my house.”

“Gabby Giffords deserves a vote,” he said, to thunderous applause.

“The families of Aurora deserve a vote.”

“The families of Oak Creek, and Tucson, and Blacksburg, and the countless other communities ripped open by gun violence – they deserve a simple vote,” the President implored.

“Our actions will not prevent every senseless act of violence in this country,” he continued. “Indeed, no laws, no initiatives, no administrative acts will perfectly solve all the challenges I’ve outlined tonight. But we were never sent here to be perfect. We were sent here to make what difference we can, to secure this nation, expand opportunity, and uphold our ideals through the hard, often frustrating, but absolutely necessary work of self-government.”

Here’s video of that portion, via C-Span: