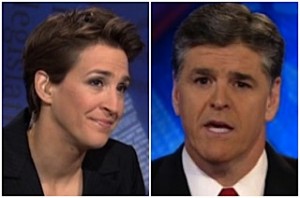 MSNBC’s Rachel Maddow had only 1K less viewers in the 25-54 demo Thursday night than Fox’s Sean Hannity. Maddow’s 248K nearly tied Hannity’s 249K, which was the lowest demo total on Fox. Hannity did beat Maddow handily in total viewers with 1.686M to her 769K.