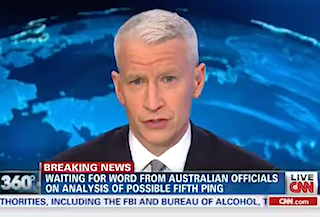 With ongoing coverage of the missing Malaysia Airlines Flight 370 Thursday night, Anderson Cooper helped lift CNN above MSNBC in the 25-54 demo in prime time. Anderson Cooper 360 was the only CNN to beat MSNBC in prime time, but he did it by enough to put the network’s average in #2, behind Fox News.

Cooper had 287K viewers in the demo compared to MSNBC’s Chris Hayes, who had 164K. MSNBC’s Rachel Maddow and Lawrence O’Donnell beat CNN’s Chicagoland and special coverage of the plane search at 9 and 10pm ET, respectively. In total viewers, Cooper also beat Hayes but it was not enough to keep CNN out of third place there.