Thursday Cable Ratings: Blitzer #1 in Demo Across CNN and MSNBC 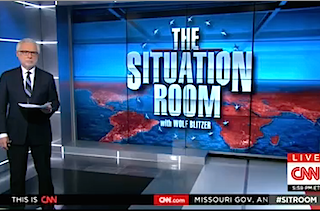 With 295K viewers in the 25-54 demo during the 6 p.m. hour Thursday evening, CNN’s The Situation Room with Wolf Blitzer was the highest-rated show of the night across CNN and MSNBC. Wolf Blitzer’s show was also #1 in the demo at 6 p.m., beating Fox News’ Special Report, though regular host Bret Baier was out and Shannon Bream was filling in.