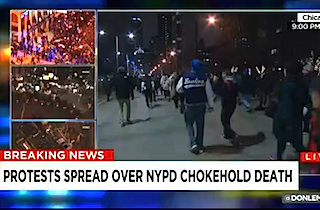 With its nearly non-stop coverage of the Eric Garner protests Thursday night, CNN almost doubled MSNBC in the 25-54 demo during primetime, 313K to 165K. Fox News remained in the lead with 396K in the demo for primetime. CNN peaked during the 9 p.m. hour when Anderson Cooper 360 had 343K in the demo, compared to 382K for Fox’s The Kelly File and 181K for The Rachel Maddow Show.

In total viewers, Fox News was far out ahead of the rest with 2.135M in primetime. CNN came in second place with 695K and MSNBC was close behind with 651K.