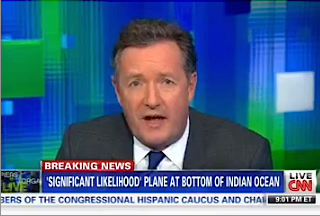 One night after CNN’s Anderson Cooper beat Fox’s Bill O’Reilly in the 25-54 demo for the first time in nearly a year, he did it again, drawing 454K viewers in the demo to O’Reilly’s 429K. With wall-to-wall coverage of the missing Malaysia Airlines flight 370, CNN’s Outfront with Erin Burnett and Piers Morgan Live had similarly rare victories over their respective Fox competition.

Fox’s prime time shows still held onto their commanding lead in total viewers, averaging 2.4M overall compared to CNN’s 953K. Meanwhile, MSNBC fell into third place across the board, except at 10pm when The Last Word with Lawrence O’Donnell came out ahead of CNN’s Chicagoland in total viewers.