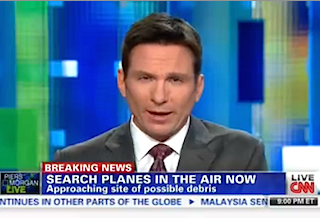 With continued coverage of the missing Malaysia Airlines Flight 370 plane Thursday night, CNN’s Piers Morgan Live with fill-in host Bill Weir was the highest rated show during the 9pm ET hour in the 25-54 demo, coming out ahead of Fox’s The Kelly File and MSNBC’s The Rachel Maddow Show. Weir drew 373K viewers in the demo, while Megyn Kelly had 353K and Rachel Maddow had 187K.

In total viewers, Kelly was on top with 1.988M, followed by Weir with 1.012M and Maddow with 844K. With Morgan ending his show this month, Weir, along with Jake Tapper, are scheduled to alternate as temporary replacements.