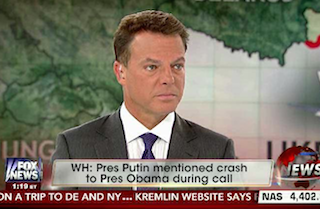 The Malaysia Airlines Flight 17 crash dominated cable news on Thursday, giving ratings boosts to all three networks, but especially CNN, which tends to thrive during big breaking news events. Fox News remained the #1 spot, growing 71% in the 25-54 demo and 52% in total viewers in primetime compared to the average of the previous four Thursdays. CNN came in second, jumping 176% in the demo and 82% in total viewers compared to the previous four Thursdays.

Though it was up 62% in primetime demo and 40% in total viewers compared to the previous weeks, MSNBC fell to third place overall. Fox’s Hannity was the highest-rated show of the night in the demo with 615K viewers, while The O’Reilly Factor was #1 in total with 3.477M. During the 7 p.m. hour, CNN’s Erin Burnett Out Front was #1 in the demo, beating Fox’s On The Record with Greta Van Susteren 412K to 377K.