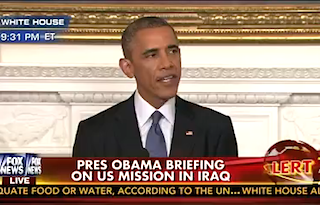 When President Barack Obama took the podium at 9:30 p.m. ET Thursday night to announce humanitarian aid and military airstrikes in Iraq, Fox News was the most-watched cable news network in the 25-54 demo with 432K viewers. With 156K, MSNBC came in last place.

CNN, which interrupted The Sixties to cover the speech, came in second with 296K and HLN, airing its regular programming, was third with 167K.

In total viewers, Fox was #1 with 2.443M, followed by CNN with 903K and MSNBC with 706K. Fox’s Megyn Kelly and MSNBC’s Rachel Maddow both took the night off, leaving Shannon Bream and Steve Kornacki to anchor the networks’ respective coverage.