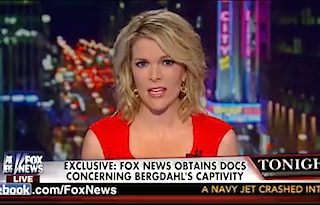 For the third time this week last night, Fox News’ The Kelly File came out ahead of The O’Reilly Factor in the 25-54 demo. But this time, Megyn Kelly also beat Bill O’Reilly in total viewers, making her show the most-watched cable news show overall in primetime. Kelly, who hosted six of Bowe Bergdahl’s platoon-mates for an exclusive interview, averaged 469K viewers in the demo and 2.980M total viewers.

O’Reilly came in second with 434K in the demo and 2.658M total viewers. This marked only the second time ever that Kelly has gotten more total viewers than O’Reilly.