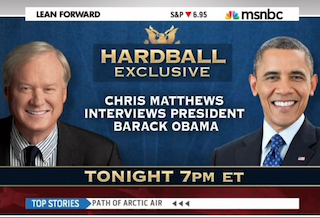 Chris Matthews‘ exclusive interview with President Barack Obama was #1 in the 25-54 demo at 7pm and the second highest-rated show in the demo for all of cable news, despite airing during other network’s live coverage of Nelson Mandela’s death. With 298K viewers in the demo, MSNBC’s Hardball beat Fox’s On The Record with Greta Van Susteren, which had 218K, in the 7pm time slot. The only show with more viewers in the demo than Hardball was Fox’s The O’Reilly Factor, which had 405K viewers at 8pm.

With 1.296M total viewers, Matthews came within 3K of Greta Van Susteren, who had 1.299M. The top three highest-rated shows in total viewers were all on Fox: The O’Reilly Factor with 2.430M, The Kelly File with 1.787M and Special Report with Bret Baier with 1.774M.