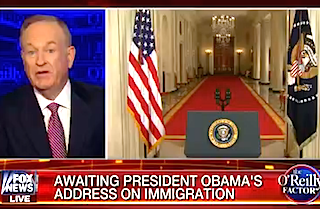 Fox News’ Bill O’Reilly got his highest ratings of the 2014 in the 25-54 demo Thursday night. And he has President Barack Obama to thank.

The president’s immigration speech aired on Fox from 8-8:15 p.m., followed by the rest of The O’Reilly Factor and during the hour O’Reilly averaged 885K viewers in the 25-54 demo. CNN’s coverage, with Anderson Cooper hosting, came in second with 578K in the demo and MSNBC was third (322K during Obama’s speech and 282K for the rest of the hour).