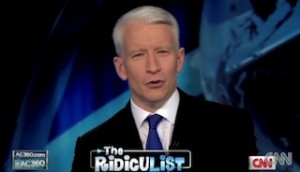 It’s no secret that ratings are a fickle beast. One night, you’re toasting with friends about the 230,000 viewers in the 25 to 54 year-old demo who tuned in to see your interview with, say, Hulk Hogan‘s ex-wife; the next, you hang your head low at the 124,000 who wanted to see you talk with some foreign head of state. These numbers, in short, make little sense. And that’s what makes it fun — the random aberrations that occur every night.

Take, for instance, AC 360. At 8 p.m., the show lost a remarkably tight race for second place to Ed Schultz and Nancy Grace, with 166,000 demo viewers. But at 10 p.m., Anderson Cooper became a ratings monster*, pulling in 258,000 viewers, almost beating Joy Behar and Lawrence O’Donnell combined in the same time slot. He not only dominated CNN’s stable of anchors, but beat out every show on MSNBC and HLN, as well.

Some other nuggets from Thursday night: