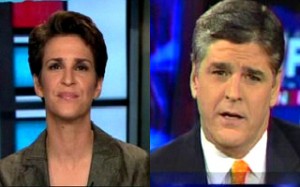 On Thursday night, MSNBC’s Rachel Maddow once again beat Fox News’ Sean Hannity in the demo. Similarly, her colleague Lawrence O’Donnell topped Fox News’ Greta Van Susteren in the demo as well. Both MSNBC-ers fell behind their Fox counterparts in total viewers however.

Elsewhere, Anderson Cooper won the night at CNN in the demo, while Wolf Blitzer took the honors in total viewers. Bill O’Reilly held the top spot at Fox News.