Thursday Ratings: Piers Bests Most Of His Peers 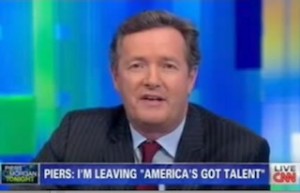 Piers Morgan — to editorialize for just a moment — is one of our favorite cable news hosts. Maybe it’s the British accent; perhaps it’s our affinity for Celebrity Apprentice winners. But he hasn’t really, as Brian Stelter of the New York Times noted Thursday, caught on yet in the ratings.

Thursday night, however, Morgan performed better than any show on CNN in the 25-54 year old demo, attracting 222,000 viewers. His numbers also bested every cable news prime time show not on Fox News, on what turned out to be a relatively strong night for CNN, resulting in a second-place overall finish in prime time.

Some other nuggets from Thursday night: