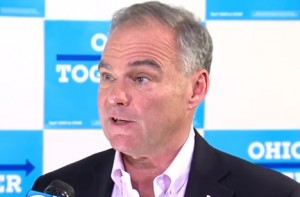 Democratic vice presidential candidate Tim Kaine claimed in an interview Tuesday that the Clinton Foundation currently no longer takes money from corporations and foreign donors, a statement at odds with its actual policies.

Kaine’s running mate Hillary Clinton announced last month that the Clinton Foundation would cease taking foreign and corporate donations if she won the presidency in November. That position has earned her criticism from outlets like The New York Times, who argue that Clinton has an ethical obligation to order the foundation to stop taking those donations immediately.

Cleveland ABC affiliate WEWS’s John Kosich made the same argument. “If you’ve been to a wedding where they yell ‘Last call in fifteen minutes,’ everyone rushes to the bar. Should we just get out in front of this now and say [they’re] not going to take any?” he asked Kaine.

But the Virginia senator replied that the Clinton Foundation has already cut off said donations. “I think it’s now, foreign donations as of now and then as president, President [Bill Clinton] will step aside from his connection with the foundation,” he said.

Watch above, via WEWS.