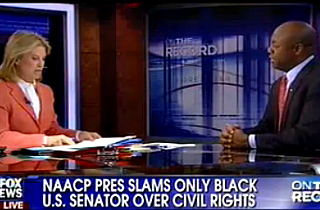 Appearing on Fox’s On the Record Thursday evening, Sen. Tim Scott (R-SC) fired back at NAACP President Ben Jealous who recently told CNN that the newly-elected black senator does not “believe in civil rights.”

“I think it’s ridiculous,” Sen. Scott said of the NAACP leader’s remarks. “I think that some folks want to find a way to make race more of a part of their conversation going forward and I think that it’s time for us to continue to move forward as a nation.”

Host Greta Van Susteren asked whether the NAACP would have still given Scott an “F” grade and such negative remarks on CNN if he were a Democrat, to which the senator replied: “Certainly. No doubt. One of the things I realized is that folks like him believe larger government means more freedom. I just completely disagree.”

Van Susteren noted that the bad grade score was over “civil rights,” not “size of government,” despite part of Scott’s “F” grade coming for votes against regulating greenhouse gas emissions — something ostensibly unrelated to civil rights.

“It’s almost laughable,” Scott remarked. “We’re going to have to have a conversation about the lowest common denominator: fear.”

In turn, Van Susteren asked: “How do we get away from that? When I heard that, I thought this sort of code for you’re Republican, you’re African-American so for the NAACP, what better way to get out and slap you on something.”

“The way to get beyond it is realizing we have an opportunity to inspire folks,” said Scott. “The future of this nation is dependent on someone coming up with one really good idea and that’s part of the free market system that we have.”