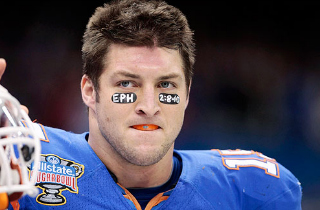 No, the conservative icon is not going full-on political and becoming a Fox News contributor on religion/social issues. He’s becoming an on-air college football analyst for the newly-formed SEC Newtork, set to launch in August 2014.

The multi-year agreement will place Tebow in the analyst chair for SEC Nation, the network’s pregame show that will tape on a different SEC campus during each week of the college football season. Before and after the season, Tebow will contribute his analysis to ESPN’s Sportscenter and ESPN Radio.

“I am so excited that ESPN has given me this incredible opportunity,” Tebow said in a statement. “When I was six years old I fell in love with the game of football, and while I continue to pursue my dream of playing quarterback in the NFL, this is an amazing opportunity to be part of the unparalleled passion of college football and the SEC.”

The college football legend had a less-than-stellar NFL career, playing two mediocre seasons with the Denver Broncos, followed by a poor showing for the New York Jets, and then an invite to train with and subsequent dumping by the New England Patriots. His most famous political media moment, as far as Mediaite is concerned, was his controversial Super Bowl anti-abortion ad cut for Christian conservative organization Focus on the Family.