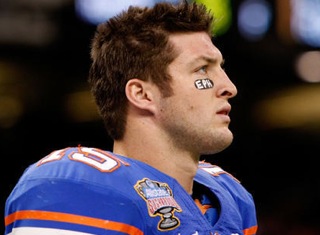 The Nation sports editor Dave Zirin has some vuh-ery definite opinions about Tim Tebow, a football player / Christian / media sensation / possible future President of the United States of America, who is coming to New York to wear a helmet and throw a ball around for lots of money. Typical New York-type things, basically. For the Yankee Sox Bear Saints Ranger Knickerbocker She-Wolves! Go team! We all love/hate/are totally apathetic towards him already! Welcome, Tim. My tips to you: the best food is in the outer boroughs, and the answer to “Do you like comedy?” is complete silence and a well-rehearsed glare.

Anyway. Zirin. He appeared on MSNBC to discuss (some of) the online reaction to news that Tebow has been traded to the Jets. “The thing about Tim Tebow coming to the Jets…” said Zirin, “Woody Johnson, the owner, just bought a circus. He bought the 28th ranked quarterback in the NFL who, for some reason, has a massive fan base that will be pressuring the team to start him every step of the way. And the Jets are doing this right after they gave a huge extension to the incumbent quarterback, Mark Sanchez. And that they signed a credible backup, a guy named Drew Stanton from the Detroit Lions.”

RELATED: Leave To Tebow What is Tebow’s: Pundits Should Leave The Player Out Of Politics

All pretty solid reasons for Jets fan(s) to be upset with the trade, right? But, ah! He continues:

It would be a circus if you let Rick Santorum loose in Las Vegas for a week and just kept a camera on him the whole time. I mean, Donald Trump in New York is ho-hum; he’s practically a chameleon in New York. But with Tim Tebow, you’re talking about somebody who has a set of ideas, let’s just say, that are different from the majority of New Yorkers. Now, I don’t want to shock you, Tamron, but there are a lot of women in New York who use birth control. And I also don’t want to shock you, but there are a lot of LGBT people who live in New York City who are also football fans, and they might want to know why the new, possibly starting quarterback for the New York Jets wants them to move backwards 30 or 40 years.

First off, letting Rick Santorum loose in Vegas would probably result in him developing a stomach ache from eating too much oatmeal at the all-you-can-eat breakfast buffet, taking a nap, and then trying to Skype with his kids while yelling that the email machine is acting up. The wildest thing he’s going to do is buy Karen an oversized novelty t-shirt that makes it look like she’s wearing a bikini.

Secondly, HEY! The wonderful thing about New York — the most beautiful thing about New York — is that there is truly a place for everyone here. It doesn’t matter whether you’re a Murray Hill douchecake who frequents Chinatown dungeons so you can feel something, anything or if you’re a trust fund baby who makes art out of used tampons and “energy,” or if you’re a feminist or a cop or a bar tender or a guy manning a street meat cart or a peep show performer or gay or a nerd or Catholic or Hindu or Muslim. If you’re a Hasidic man in South Williamsburg or a dread-wearing grad student at Trader Joe’s who doesn’t understand me when I ask if they sell chorizo. You all have a place here. You have a voice here, you have a community here.

I’m not sure what impression people have of Tim Tebow, or any other celebrity, but the guy is not going to wander into the stands and point accusingly at women’s wombs. He’s not going to tear our birth control pills from our hands or force gay couples to stop holding hands down the street. If Tim Tebow truly had the power to move anything back 30 or 40 years, he’d be in Congress, not playing football. He might make a commercial people take issue with because they think it’s stupid or inappropriate or wrong. Fine. Write a letter, write a blog entry, sign a petition. But to insinuate that Tebow doesn’t have a place in New York because, what, he’s against abortion? That’s silly. And distracting.

He might not warrant a place on the Jets in the estimation of the team’s fan(s), but his views shouldn’t form some sort of force field around him that keeps him from entering The Levee (especially since it’s entirely full of striped shirts now anyway). Perspective, guys. How can you possibly ask those who disagree with you to have an open mind if you close yours off to them?

Lean forward a little. You know?

Have a look at Zirin’s take on Tebow, via MSNBC: