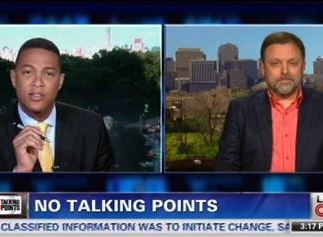 On Saturday night, CNN’s Don Lemon delivered a response to the controversy surrounding his agreement with Fox News host Bill O’Reilly‘s diagnosis of the black community’s ills. In the spirit of equality, Lemon followed up that segment by hosting anti-racism educator Tim Wise, and his “Five Tips For White People to Improve Race Relations, or Improve Their Conditions.”

Lemon took considerable criticism for his own five point plan, which included:

Don’t get me wrong, Wise makes points that are true, if a little bit obvious, but his five points are really only one point: the very low bar of acknowledging that racism exists. His first point is that “when we talk about racism, we’re automatically talking about the period of enslavement, but when black and brown folks are talking about racism, they’re talking about now, stop and frisk, racial profiling, 2 million cases of housing discrimination a year.”

His second point, as enunciated by a rushing-to-get-through-this Don Lemon, is to “assume people know their own lives better than you do,” that “black folks aren’t crazy when they say they get profiled.”

Again, that’s a decent point, but one that’s covered in the first, and one which presumes genuine doubt on the part of white people. As the expanding plume of post-Zimmerman white commentary makes clear, many whites do believe that black people are profiled, and that they deserve it, or at least that it is reasonable.

When Wise calls out the irritating “I have a black friend” defense, he’s picking low-hanging fruit, and yet still manages to miss something crucial. He explains that “Just because you have people who are close to you in a marginalized group doesn’t mean that you don’t carry any prejudice in the larger society,” but he fails to explain why that is. Prejudice isn’t about how we judge people we already know, it’s about how we judge strangers. George Zimmerman had black people over to his house, but even his defense attorney argued it was reasonable, even wise, for him to suspect Trayvon Martin because he was a young black male. Most friendships are formed over some sort of common ground, not in the street among strangers.

Wise’s fourth point, as far as I can tell, is indistinguishable from his first, but when he advises white people to “confront the long legacy of white denial when it comes to racism,” he makes the troubling statement that “If we didn’t see it when it was blatant and we were wrong, and black and brown folks saw it and they were right, what makes us think that suddenly we’ve become really perceptive, and they’ve lost their minds?”

That’s troubling because it is premised on the idea that today’s racism is not blatant, which is only remotely true through the lens of white denial that Wise decries. Stop and Frisk, the gutting of the Voting Rights Act, voter suppression laws that even directly target black churches’ tradition of Sunday voting, arrest and sentencing disparities, these are not subtle. By accepting the white culture’s definition of blatant (which I’m still not sure even exists when “Niggerhead Ranch” is seen as debatable), Wise simply arms the willful ignorance he’s supposed to be fighting. And let’s be clear, white people in the 60s weren’t really confused about equality, nor are they today. Racism runs on the fuel that black people have earned these inequities.

That’s where point five comes in, using statistics to justify prejudice. Racists don’t think they’re racists, they just think they’re telling truths that the rest of you pussies are afraid to. If you tell them not to use statistics, they’ll use something else, like the Bible, or shit they make up. Admittedly, statistics are particularly insidious because they carry the whiff of objectivity, but even arguing about them creates the idea that there exists a statistical threshold that could justify something like Stop and Frisk, and we just need to argue about whether or not we have reached it.

Stop and Frisk is wrong for several reasons, not the least of which is that the police are acting on suspicion that is demonstrably not reasonable. If 100% of all crimes were committed by black people, it would still not be reasonable to stop and frisk four million or so completely innocent black people.

Tim Wise means well, but he’s really not expecting white people to do anything but recognize racism, which we all already do. When white people see incontrovertible proof of police brutality, does Tim Wise really think they believe it only happened this one time, or that “you have to watch the whole tape?” No, they think the guy had it coming, was probably guilty of something.

Like Wise, I could probably think of a million things for white people to do (including everything on Don Lemon’s list, particularly the littering. Seriously, there’s a garbage can outside every 7-Eleven, do you really have to empty the ashtray under your car?), but if I had to boil it down to five, I’d start with these:

I also really hate it when white people point out “how far we’ve come,” as if still falling well short of minimum human decency is cause for celebration, but we are never going to get where we need to go if we don’t expect more.