TIME Exec Editor To Matthews: ‘We’re All Welfare Queens’ and ‘Socialists From The Day We’re Born’ 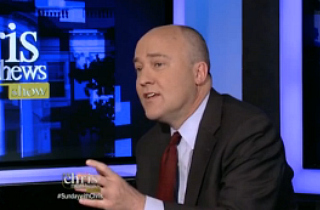 We are all welfare queens and socialists now, according to TIME executive editor Michael Duffy.

Appearing on Chris Matthews‘ syndicated talk show, Duffy explained that it’s not just the elderly and the poor who receive entitlements and government subsidies — it’s everyone.

“Explain that to the skeptic out there who says, ‘What’s this guy talking about?'” Matthews asked.

“You don’t have to just get direct payments in the form of Social Security or Medicare,” Duffy continued. “You get it in the form of tax benefits for your house or for child care or or for commuting or for parking. So it’s a totally subsidized nation. One nation subsidized.”

Veteran journalist Dan Rather chimed in that “the big corporations and people who make a lot of money” are also subsidized by the government in a variety of ways.

Duffy agreed, adding that his overall point is that “while the entitlement program is what’s driving the budget, the notion that it’s a few people, it’s all of us.”