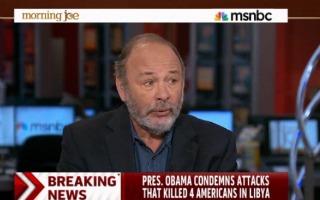 Yesterday night, President Obama and the Israeli Prime Minister had a call about “the threat posed by Iran’s nuclear program.” Earlier that day, however, the PM had accused the White House of having snubbed his request for a meeting — a claim the White House denied by saying that no such request to meet was even made.

Here’s what Klein had to say about Netanyahu’s recent actions:

I don’t think I’ve ever, in the 40 years I’ve been doing this, have heard of another of an American ally trying to push us into war as blatantly and trying to influence an American election as blatantly as Bibi Netanyahu and the Likud party in Israel is doing right now. I think it’s absolutely outrageous and disgusting. It’s not a way that friends treat each other. And it is cynical and it is brazen. And by the way, a little bit of history here: In December of 2006, George W. Bush went over to the Pentagon, met with the joint chiefs of staff and asked them, “What do you think about military action in Iran?” They were unanimously opposed to it. And as far as I know, the United States military, the leaders of the United States military, are unanimously opposed to it to this day. This is a fool’s errand. It would be a ridiculous war with absolutely no good coming of it.

Panelist Lawrence O’Donnell asked Klein — as the only one in the group who has been to Iran — what he sees as “the possibilities of the actions being taken now against Iran.”

Klein began by pointing that, even though “Republicans talk about Ahmadinejad,” the Iranian president “has absolutely no power; he’s a figure head.”

Later, Klein explained why he sees the premise of a nuclear-armed Iran is “ridiculous.” Watch, courtesy of MSNBC: