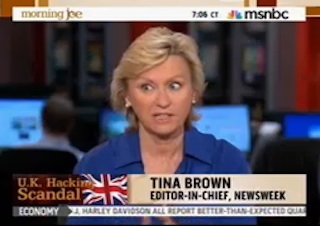 One of the biggest questions remaining after Rupert Murdoch‘s testimony to a British Parliamentary committee yesterday is how much did the News Corp. CEO know specifically about the phone hacking scandal and alleged corruption surrounding it. This was the topic today on Morning Joe, and Joe Scarborough relayed that Murdoch is a spry micro-manager, but how to explain the doddering testimony yesterday? Tina Brown compared him to Vinny “The Chin” Gigante who feigned legal senility to avoid doing time. Whoa.

In the late 80’s Gigante was alleged to be faking mental illness, and was known to walk outside his Greenwich Village apartment in a bathrobe and pajamas. His legal defense to racketeering charges was based on many witnesses who claimed that he was unfit to stand trail (this narrative was later borrowed by HBO’s The Sopranos by character Junior Soprano.

Scarborough proclaimed that “Rupert is an incredibly hand-on manager,” but hedged that “he didn’t seem to know what was going on” with this specific scandal. Brown interjected (rough transcript provided by TVEyes):

I have to beg to differ. You remember the gangster who pretended to be nuts and used to walk around in his bedroom slippers? I felt with Rupert it was as he was, seeming to be this out of it guy who is now removed from his empire. He is utterly hands on, I don’t think to the point where he would listen to the detail of phone hacking. He wouldn’t need to or particularly want to.

When he talked about how he phones the editor of News of the World on Saturday night and asked if he ever asked about the $600,000 payoff, he said no, didn’t ask about that, he would absolutely know about that. When he said ‘what’s doing?’ he would say what’s in the paper the next day. The second question would always be how did you get it? He likes process.

While Brown seems to be making an effort to ultimately praise Murdoch, this is the most damning feint praise imaginable, and the comparison to a convicted mafia don who “pretended to be nuts” can’t be something that that pleases the Murdoch family.