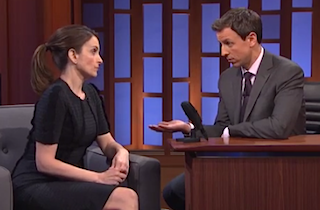 Tina Fey is just as obsessed with the “late night wars” as everyone else. In fact, she might actually be more into it because it involves all of her friends. When she sat down with Seth Meyers on Late Night Wednesday, she shared her theory on how a female host could ultimately break into the traditional boy’s club that is late night television.

“The late night wars are my Super Bowl,” Fey told Meyers. “I love reading about it. I love talking about it, because I feel like I kind of know the players, but it doesn’t affect me at all.”

With David Letterman leaving and Stephen Colbert taking his place, Fey explained that she knows what has been keeping women out of late night and who could be the host to change that pattern.

So while Fey doesn’t think she could pull off the late night look at the point, she knows who could. “I think Ellen is gonna be the first person to break through,” she said. “Because she’s already wearing jackets.”