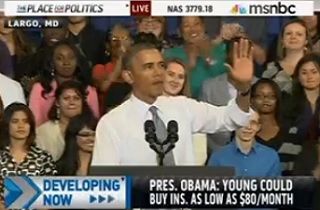 On Thursday morning, President Obama delivered remarks on the Affordable Care Act to an enthusiastic crowd at Prince George’s Community College in Largo, Maryland, a crowd that reacted strongly to the President’s open mockery of Republican rhetoric against the law. Referencing the Republican Party’s urgent efforts to kill the law before it takes effect, the President asked “What is it that they are they so scared about?”

The crowd responded, in near-unison, “Yoooou!”

President Obama adopted the mocking delivery of Bill Cosby describing the misbehavior of a child, as he told the crowd that Republicans “have made such a big political issue with all of this, trying to scare everybody with lies about death panels and killing granny, right?”

“Just the other day, one Republican in Congress said we need to shut this thing down before the marketplaces open, and people get to see that they’ll be getting coverage, and getting these subsidies because — and I’m going to quote him here, he said ‘It’s going to prove almost impossible to undo Obamacare. So, in other words, we’ve got to shut this thing down before people find out that they like it,” the President said, to more applause from the crowd.”That’s a strange argument.”

There have been several Republicans who have made statements to that effect, including Senator Ted Cruz (R-TX), whose extended floor speech was in opposition to the Affordable Care Act. In July, he told Sean Hannity “If we don’t do it (defund Obacare) now, in all likelihood, Obamacare will never, ever be repealed. Why is that? Because on January 1, the exchanges kick in, the subsidies kick in,” and added that “their plan is to get the American people addicted to the sugar, addicted to the subsidies, and once that happens, in all likelihood, it never gets…”

“It’s over,” Hannity cut in, “it never gets repealed.”

But the biggest reaction from the crowd came when the President ticked off another example of Republican rhetoric against the law. “You had a state representative, somewhere, say that it’s as destructive to personal and individual liberty as the Fugitive Slave Act,” Obama said, as the crowd shouted disapproval. “Think about that. affordable health care is worse than a law that let slave owners get their runaway slaves back.”

In case you think the President must be exaggerating, here’s what New Hampshire State Rep Bill O’Brien actually said: