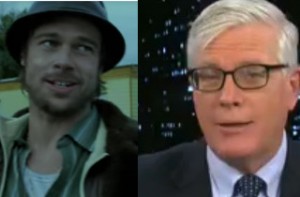 If you’d like some insight into the current state and likely future of the GOP primary, conservative radio host Hugh Hewitt recommends you revisit the 2000 British crime caper Snatch.

I’m not kidding, and neither is Hewitt.

When CNN host Don Lemon asked Hewitt to opine on the state of the race, Hewitt responded:

Go watch the movie Snatch from 2000, 15 years ago. Boris the Blade is Donald Trump. And Brick Top is Hillary Clinton. And Mickey is John Kasich. And Dennis Farina plays Ted Cruz. Bloody, but in the end he gets a piece of the pie. So if you watch Snatch, it was chaos looking for a diamond. A great movie, a terrific movie. But chaos reigns. But there will be a winner in Cleveland.

Snatch, you may recall, was Guy Ritchie‘s darkly comic ensemble piece, which followed a motley cast of colorfully-named characters from the London underworld scheming and counter-scheming against each other in pursuit of a “diamond the size of a fist,” amid the occasional explosion of hyper-stylized violence.

Allow me to parse some of Hewitt’s analogues for the uninitiated. Boris the Blade (aka Boris the Bullet-Dodger), portrayed by Rade Sherbedgia, was the conniving Russian who, like Trump’s candidacy, is seemingly unkillable. Brick Top, played by Alan Ford, is the resolutely evil mob lord who chops up his enemies and feeds them to pigs (according to Hewitt, that was Clinton). Mickey is the fast-talking gypsy con man and bare-knuckled boxer portrayed by Brad Pitt, in whose gibberish-spouting antics Hewitt apparently sees a correlate to Ohio Governor John Kasich. And Dennis Farina’s character was Cousin Avi, the American Jewish mobster who flies all the way to England to recover his diamond only to have his best-laid plans laid to waste by absurd twists of fate, not unlike Texas Senator Ted Cruz.

You can view the trailer below: