Tom Coburn to MSNBC: ‘I’m No Longer a Conservative’ According to Ted Cruz
VIDEO

Tom Coburn to MSNBC: ‘I’m No Longer a Conservative’ According to Ted Cruz 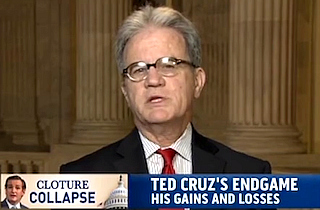 “I’m finishing up nine years in the Senate,” Coburn said. “Nobody has a higher conservative rating than I do. I’m now no longer a conservative according to the standards that have been set by the expectation of this process.”

“I’m getting all sorts of e-mails from people that supported me, because they have been misled about what’s possible.” Coburn said. “Do people not think if I could change ObamaCare, I’d do it in a minute? It’s a disappointment that we have put a short term goal with lousy tactics ahead of being honest with the American people.”

The Senator noted that Cruz had nowhere near the sixty-seven votes in the Senate necessary to override President Barack Obama’s inevitable veto of a continuing resolution that defunded his principle legislative accomplishment.

“The problem with politics is if you create expectations you can’t fulfill, that leads to disappointment,” Coburn said. “You know, I’m all for changing the Affordable Care Act, eliminating it and doing something that’s more transparent, more market-oriented. To create the impression that we can defund ObamaCare when the only thing we control—and barely—is the U.S. House of Representatives, is not intellectually honest.”