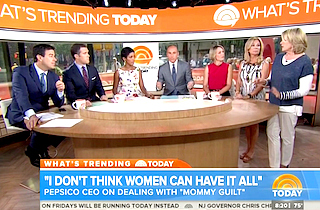 Matt Lauer stepped in it last week when he asked General Motors CEO Mary Barra if she felt her executive duties interfered with her parental ones. On Thursday morning, Lauer, the Today show crew, Kathie Lee Gifford, and Martha Stewart all agreed that they were “surprised” at the backlash the prompt had generated, and defended Lauer’s line of inquiry.

“I always felt this is not a gender issue,” Lauer said. “This is a human issue of work and life balance. it’s a parenting issue for men and women, moms and fathers. Question I ask myself every single day. But clearly it still touches a nerve.”

Lauer asked if it were still a taboo subject. The response was that the subject itself wasn’t necessarily taboo; rather, the problem lay in the fact that male CEOs don’t get asked the same question. “If a male CEO were to come out and say, ‘I am very upset I missed my son’s prom, and I think my kids will hold me accountable for one job and that is a father?'” Lauer replied. “Yes, we’d ask that question.”

Gifford and Stewart were brought on to offer perspective as “working moms.”

“You said it very, very respectfully,” Gifford said. “I think certain people are just very sensitive about it, for their own reasons.”

“If you’re on a CEO path, or you are a CEO, you have to have that backup team that really knows how you want your children taken care of,” Stewart counseled. “You can’t say that about the husband. They can’t take care of your husband the way you should be taking care of your husband.” Resolved.