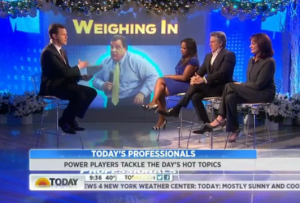 The Today Show‘s “Today’s Professionals” panel chimed in this morning on how New Jersey Gov. Chris Christie‘s weight factors into his potential presidential hopes. The discussion came following Barbara Walters asking Christie about those who believe he is too overweight to be president — an assertion he dismissed as “ridiculous.”

“His weight is his image,” Donny Deutsch argued. “He’s straight talking, doesn’t look like a politician, and looks like the guy next door that’s overweight. ” The question, as a voter, he added, would be if there’s a real health problem — because self-discipline translates to health as well as to decision-making at such a high level.

Nancy Snyderman noted that Christie could not enter the military. As commander-in-chief, she said, “How do you send young men and women into war when you yourself would not be able to enter the armed services?” Furthermore, she added, if health is an issue, then the vice presidential candidate matters.

That’s the “determining factor,” Star Jones chimed in. “Having been morbidly obese,” she said, “I can tell you the nice words — chubby, plus sized, full figured, overweight — they might make you feel good, but obesity is the issue.”

Circling back to Christie’s “brand,” Deutsch said that, after losing “a ton” of weight, one of his friends also “lost some of their presence.”

“His weight gives him some commanding presence,” Deutsch said. “It’s a very very layered issue, it really is.”

This discussion brought to you by “2016: It’s Never Too Early.” And it’s only December.

The clip below, via NBC: